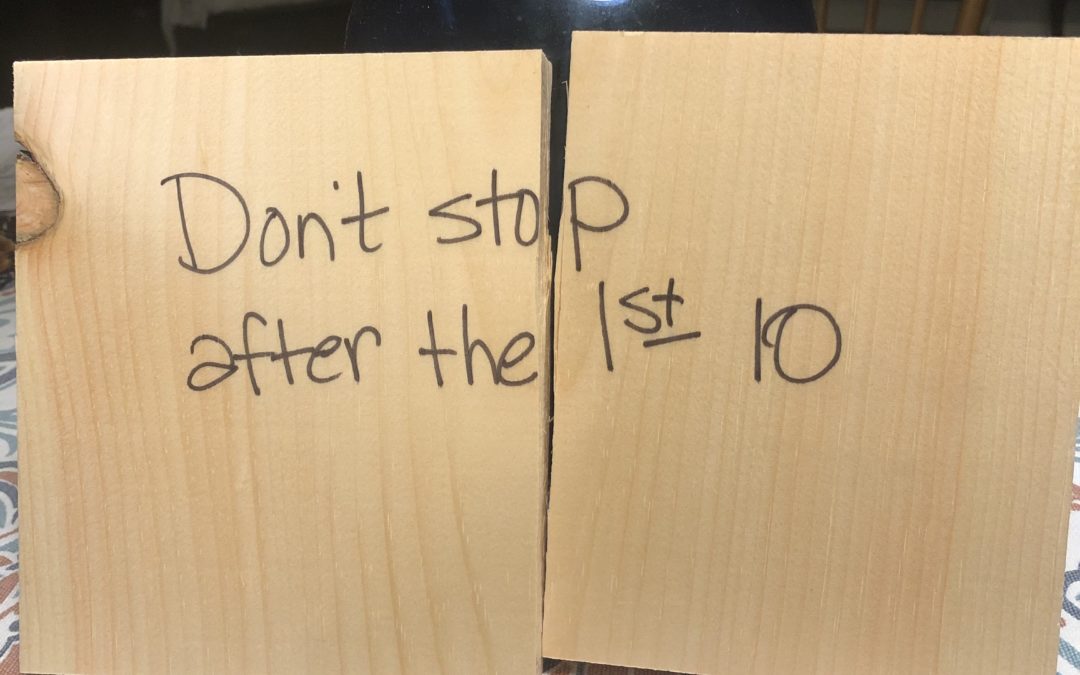 I should have known something was up when she stopped class 15 minutes early. This was my favorite cardio class instructor, the one who works you like you’re in basic training, but with really good music. The second clue was this pile of boards she was carrying.

10 weeks ago, I looked at the calendar, and then the mirror, and decided that NOW was the time I had to get serious. This was going to be a reboot of my commitment I made in January to get in shape for my son’s wedding in December.  I had been doing so well, and then life got in the way and I became a much lower priority in my hectic life. Well, as my not-so-fit-or-happy image now confirmed, it was well beyond time to get back to making myself the focus, at least for a while. So, with glowing recommendations in hand, I made the commitment to do a 10-week exercise and nutrition program.

This program entails taking an intense 45-minute exercise course 5 days a week, with an accompanying eating plan and motivational support. I knew that when I signed up. But no one mentioned anything about these boards.

After a rousing pep talk, the instructor asked each participant to write something on their board that they wanted to “break through”: something that was holding them back from reaching their next level of potential. Now, I do this for a living: helping people to live their best life. And I?ve done lots of work on myself in this and other areas. So, I had a hard time coming up with something.

As I sat there, befuddled as to what to write, I became aware of something else going on in my head: that old “Don’t tell me what to do” voice. This has been both a great motivator in my life, and a great way to avoid doing things, when I listen to it. It was the voice that was talking loudly to me when I went for my initial meeting there. It was very busy translating everything I heard into reasons why this was not a good idea. When they said “It’s a great team environment – we give each other high 5’s and motivational talks,” I heard “It’s a rah-rah place. Like a bunch of cheerleaders. You’ll hate it. You’ll never fit in. It’ll be a waste of money.” When they said “We have a great nutritional program if you want to follow it,” I heard “It’s a quick weight loss program and you know that won’t work. You might as well do it on your own.” And now, listening to the instructor talk about breaking through, the voice was saying “You could be giving this talk. You’ve been there/done that. Leave this to those who are new on this path.” And so, I sat there, watching everyone busily writing away on their boards, and I, with a smug grin my face, looking at a blank slate.

Next the instructor asked people to bring their board up to her, one by one. She had them tell what they wrote and why this is something they want to change. She then held up the panel with outstretched arms in front of her, and told the person to break through it (with their hand), literally and figuratively. I watched, so proud of each person. At the same time, I continued to silently come up with more reasons why this was a great exercise for THEM, but really, it didn’t apply to me. But as the group went on, one by one, each person proudly breaking through their boards, something shifted. I started to panic. I looked around and there were only a couple people left who hadn’t done it yet. Surely, she wouldn’t call me out and MAKE me do it, would she? The voice now shifted into its own panic mode and said “You don’t want to be the only one who said I couldn’t do it!” And with that, finally, the block in my mind broke, and I came up with this: “Don’t stop after the 1st 10.” It could be 10 weeks, 10 minutes, 10 pounds…whatever. And it was my turn, the last one left. I went up there, nervously, and not at all confident that this would work. Now I was thinking I’d probably be the first one that failed at it. Public humiliation – just what I was looking for. See, I should have listened to that voice 9 weeks prior!

I stated my intention to the group, and cautiously hit the board. Nothing. Well, not everyone got it the first time, I told myself, and I knew I had held back. With encouragement from the instructor, I tried again. Nothing. And now, with time running out, I knew I did NOT want to fail. This was ridiculous. Who was I? A person who was satisfied with ?well, at least I tried…??  Or someone who someone who actually did what they set out to do? Hadn’t I pushed through the first 2 weeks of exercising while feeling lousy from the detoxing from sugar? Hadn’t I been the one who faithfully readjusted her schedule so she didn’t miss a day? Hadn’t I been the one who actually brought her workout clothes to a networking event, changed in the bathroom on the way out, and was caught in the quick change by a colleague-because getting to class and making myself a priority was more important than the potential embarrassment of being seen in my workout clothes while leaving a business event?  YES, I was and am that person!  And with all my strength, determination and mental and emotional conviction, I pulled back my arm, and shot my hand through that board.

Who would have thought a “little exercise program” would have helped me break through and silence that voice inside of me that unwittingly holds me back? I’ve realized that I spend a lot of time telling myself it’s “good enough”, and I don’t go any further. I don’t try because I am afraid of failing or it seems like too much work or any number of excuses. I become comfortable with the complacent. I now have visual evidence of the power of a positive, focused mindset.

And speaking of visual proof, here’s how those 10 weeks worked out.

Well, just the FIRST 10 weeks. I’m not done with being good to myself yet.