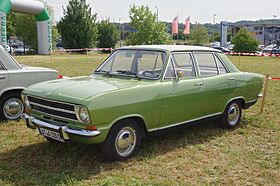 When I was 16-years-old, with my new drivers license just itching to be put to good use, my parents decided it was time to get a 2nd car. Up until that point we had survived somehow on just one car for our family of 5.  I think the truth was that my mom finally got tired of driving everyone everywhere. So, off we went to the car dealership.

Now, we were a Buick family. Always had them. Big Buicks. And we lived in Michigan, so none of this little foreign car nonsense.

We went to see Mr. Doot, our neighbor and resident car salesman. But, instead of steering us towards the usual practical cars, he starts talking about their other line, the Opel Kadetts. What?! And my parents were listening to this!  And the Opels were not automatics, but stick shift vehicles. What?! Small, foreign and manual? We never did anything that radical!

I remember that moment of feeling both giddiness and utter fear, when my parents said to me ?Do you want to take it for a test drive?? Do I want to?? YES! However, there was this one TINY little issue: I did not know how to drive a stick shift. Almost as an afterthought they said ?And you know how to drive one of these, right?? I was NOT going to lose this chance, so of course I said ?YES!?

I have NO idea how I drove it. I don?t think I knew anyone who HAD a stick shift car. How did I know what to do??  Maybe Mr. Doot took me out and gave me an impromptu lesson. In any case, I did it well enough to convince them that this was THE car, and they bought it. Buying that car and getting a dog were the two biggest surprises my parents ever laid on me. I?m still in awe.

I totally lacked the skills I needed when I first drove that car, but I certainly knew what I wanted and I figured it out. I got to the point where I was so accomplished at it that I could even drive it up huge hills and not roll back into the cars behind me at red lights. In the snow. I became such a natural shifter that I could have lived in San Francisco.

There have been other times in my life where shifting played an important role ? figuratively. I distinctly remember times when I found myself shifting course or shifting my mindset and having the same attitude: I had no idea how to do it, but I knew what I wanted. One was going into college. Who knows what to expect when you suddenly find yourself away from the family rules? I leapt into that with both feet, and learned what worked and what didn?t along the way.

I saw Joan Lunden years ago at a women?s conference, where she was keynoting and delivering a message of ?Just Say Yes?.  She shared the story of when she was offered a network news job, and she had no idea how to do it, but she yes and trusted that she could figure it out. This is contrary to what women typically do. An HP study showed that men applied for a job or promotion when they meet only 60% of the qualifications, but women applied only if they meet 100% of them*. I get that. Although there were times, as I noted above, where I had the courage/faith and acted like Joan had, there were MANY times when I more fit the norm. I let my fear of the unknown or concern about what others may think rule my actions.

There was also a very interesting statistic in the same article* that shows that when women are in their 20?s and 30s, they are far behind men in self-confidence. However, we seem to even out in our mid 40s-50s?then go ahead of men in our 60s and beyond. Oh, I SO know that to be true!! And I think it is in large part behind my latest shift: From Planning to Flowing.

Gone are the days when I want to work on the 5-year plan. Where I want to set the goals and put the structure in place to achieve them. Instead, I am in a place of being present. I don?t know what tomorrow will bring and actually, it doesn?t matter all that much to me. I have today and that is what matters. I have shifted from making plans and ?checking boxes?, as I heard Michelle Obama talk about recently, to spending my time finding my passions, setting intentions, turning it over and excitedly waiting to see what shows up on my path. Because, guess what? It does! Maybe not in the way I thought it would, and maybe not in the timeframe I had anticipated, but almost without fail, it does. And if it doesn?t, well, I believe that there?s a good reason for that. I let it go and get on with my day.

That 16-year-old who knew what she wanted and was going to figure it out as she went is still alive and well within me. It all begins with a passionate desire and then trusting that the rest will be made known. Who knew that the secret to life is all about learning to shift?